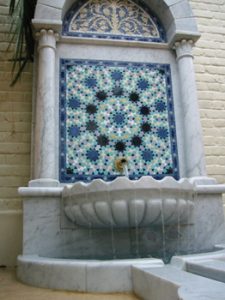 Already the Ancient Egyptians and Persians enjoyed water fountains in their lavish gardens, and this time-honored artistic tradition has continued with the Greeks and Romans through the Middle Ages and Renaissance until today. Mosaics have been around at least since the fourth millennium B.C., and this art form was developed particularly in Italy and Constantinople  during the Roman Empire. As an artist and craftsman, I have felt drawn to both fountains and mosaics and have enjoyed experimenting with both these ancient art forms, often combining them.

The marble fountain featured in the photo to the left was commissioned for a private residence in Sloan Square  and presented many challenges. One of them was to get a shipment of skillfully carved Carrara marble from Morocco to London in one piece! Freshly quarried marble tends to be rather fragile. The various parts that make up this fountain were carved from one solid block of marble, and the pieces were shipped in eleven separate crates.  Since the garden’s top soil was very deep and soft, it had to be removed and back-filled with ten tons of rocks and concrete to create a solid enough foundation for the one-ton fountain. The light gray veins, which are the hallmark of world-famous Carrara marble, give it charm and character. The style is a mixture of Moorish al-Hambra, Ancient Persian and Syrian influences. And what gives it its unique character is the free-standing horseshoe arch, which is locked together with a central keystone. Both the tree of life mosaic and the central ten-fold pattern were made from high fired ceramic tiles.